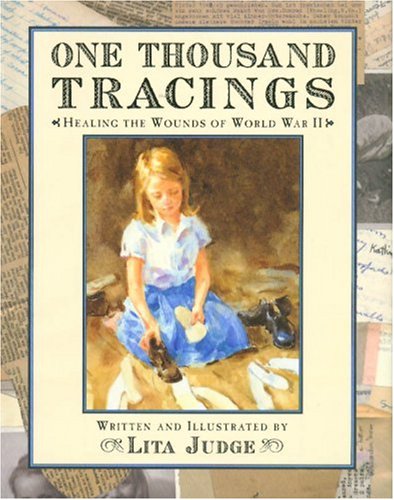 One Thousand Tracings: Healing the Wounds of World War II

A mother and daughter's homegrown relief effort, which spanned a year and a half and aided numerous German families after World War II, is the subject of Judge's debut picture book. Judge's lyrical prose tells the true and poignant story of her grandmother and mother's endeavor to find shoes, clothing and foodstuffs for hundreds of Germans devastated by the war. When Judge's grandmother receives a letter from German friends describing their poverty, she sends them a Christmas package and promptly receives back additional requests for help. These appeals for assistance often include tracings of feet (sometimes cut from German newspapers) so that shoes might be found to match. “The men fought their battles during the war./ Now Mama and I fought our own battle./ A battle to keep families alive.” The young daughter's narration offers a child's perspective on the tragedies and hope of the era, making the story especially accessible to young audiences. Softly rendered watercolor bleeds portray the quiet emotions of mother and daughter, often in close-ups, as they match donated shoes to the tracings or call upon neighbors to help. Photographs of some of the actual tracings and of several families who were helped are included in endpaper collages. The book is a powerful testament to one family's ability to affect the lives of hundreds. A concluding author's note describes the lasting friendships this goodwill effort fostered. Ages 5-9.