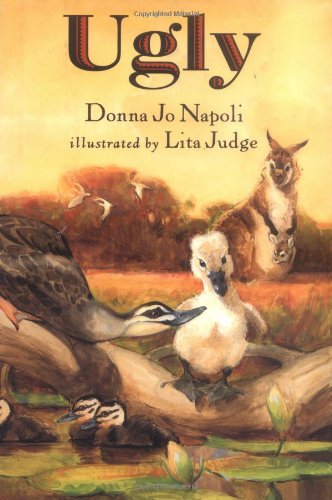 In the tradition of her and , Napoli here retells Hans Christian Andersen's , but with an educational bent that at times overwhelms the story. Set in Tasmania, the book opens when the as-yet-unhatched narrator hears a freckled duck speaking ominously to his mother, a Pacific black duck, about the odd shade of his eggshell. After he hatches, the freckled duck exclaims, "That thing's as ugly as ugly gets," and the name sticks. Ugly loves his mother and siblings, but discovers that he behaves and thinks differently. His oddities put the whole duck family at risk, as other duck species attack Ugly and the rest of the brood, and Mother leaves him behind at less than one week old. The narrator's naïveté allows readers to learn right along with him about the animal life indigenous to Tasmania: he climbs onto a wallaby's back for protection, stays in a wombat's burrow for a time, and survives the winter with a Golden Brushtail Possum, before discovering his true identity as an Australian black swan (which readers likely will have gleaned from Judge's half-tone illustrations). Napoli's descriptions of Ugly's first flights are among the novel's highlights. But the sheer number of animals (and two stints with human families) often push Ugly's character development to the background, making an ending that should feel triumphant fall somewhat flat. Ages 7-10.