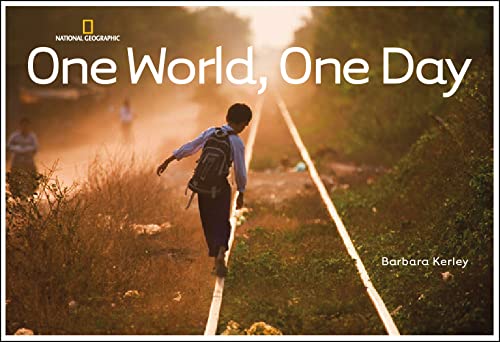 One World, One Day

Sixty crisp, skillfully composed photographs follow children from all corners of the globe through a day, revealing activities that are strikingly similar yet widely divergent in the details. The juxtaposition of images is often remarkable. A photo of a girl waving from the back window of a Pennsylvania school bus appears beside a picture of a child in China's Yunnan Province, whose commute entails crossing a river in a seat suspended from a zip line. Many of the photographers (the images come from numerous sources) use light to dramatic effect: a soft glow illuminates the faces of eight girls in Gujarat, India; sunlight streams through windows as four boys stand at prayer in an Indo-nesian mosque. Supplementing Kerley's ( ) minimal, pithy text (“Recess rocks! And so does lunch”) are substantive concluding notes that specify the locations, provide cultural context for the photos and—most intriguing—offer occasional photographers' perspectives: the photo of the Indian girls was taken in a refugee camp (“They were wonderful and full of laughter despite the terrible conditions”). An arresting, eye-opening compilation. All ages.