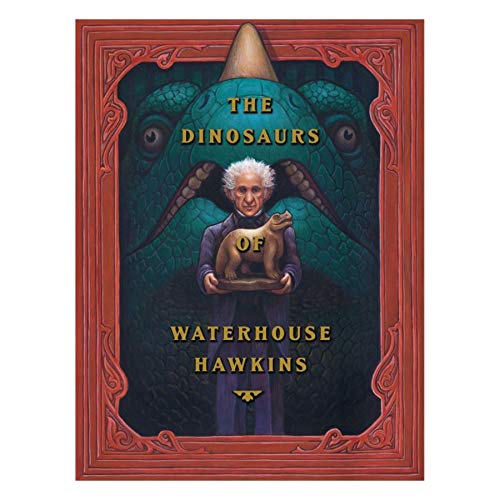 THE DINOSAURS OF WATERHOUSE HAWKINS

One look at this amazing-but-true picture book introducing the little-known artist Hawkins and his dreams of dinosaurs, and kids may well forget about .

As a child growing up in 19th-century London, Benjamin Waterhouse Hawkins discovered his passion: drawing and sculpting animal figures, especially prehistoric dinosaurs. His artistic talent and his goal—to build life-size models of dinosaurs envisioned from scientific fossils—led him to work with noted anatomist Richard Owen and complete a special commission from Queen Victoria and Prince Albert, an installation of dinosaur statues, much of which still stands in contemporary Sydenham, England. During the project, Hawkins courted the scientific community by hosting a lavish New Year's Eve dinner party his life-size model of an iguanodon (the bill of fare is reproduced on the final page). Selznick (, see p. 94) builds to the dramatic moment by showing readers a peek at giant reptilian toes through a parted curtain.

Kerley () leads readers into further exploration of Hawkins by presenting copious but never dull details of the stages of his life and works, including efforts in the U.S., thwarted by Boss Tweed. Throughout, she suffuses her text with a contagious sense of wonder and amazement. Selznick enthusiastically joins the excitement with his intricate compositions, capturing Hawkins's devotion to his art and depicting the dapper man with wild white hair as a spirited visionary and showman. The elegant design on tall pages gives the dinosaur models their due from various perspectives, and scenery of the period additionally grounds the work in historic context. Extensive author and illustrator notes denote the extensive (and fun) research both undertook for this extraordinary volume. Ages 6-up.