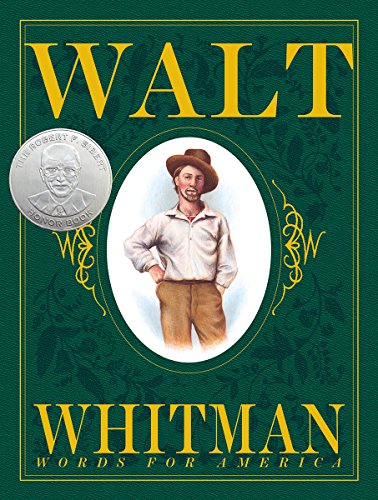 The creators of open this innovative, intriguing biography with an anecdotal look at the poet's early years as a printer's apprentice in Brooklyn, where his love of words was born. By the age of 19, Walt was writing and printing his own newspaper. With a lyricism and an ardor that echoes Whitman's own, Kerley writes of his passion for both language and for "rambling," the latter luring him onto Manhattan's city streets ("in these ordinary Americans he saw the true spirit of the nation") as well as the countryside (in "every leaf and blade of grass, he felt America's grace and vigor"). The heart of this story centers on the wrenching though inspiring effects the Civil War had on Whitman who, too old to enlist in the Union army, traveled to Virginia to stay with his wounded younger brother, then spent years caring for other hospitalized, often dying soldiers—the source of some of his most memorable verse. The elegant design of the paper-over-board volume features a die-cut cover image of the poet that echoes the dust jacket of the original 1855 edition of , as well as text set in Whitman's favorite typeface (also used in ) arranged in vertical or horizontal panels—or set directly into the art. Selznick's versatile illustrations encompass a stark realism (sepia-toned daguerreotypes of Civil War soldiers, based on actual photographs) and surreal whimsy (as Whitman walks in the country by moonlight, the sky above is filled with open notebooks bearing words from his writing). Copious quotes from his poems and correspondence let Whitman's eloquent voice resonate through the pages, and bountiful source notes remove any doubt of these talented collaborators' affection and admiration for their subject—their enthusiasm is convincing and contagious. Ages 7-10.