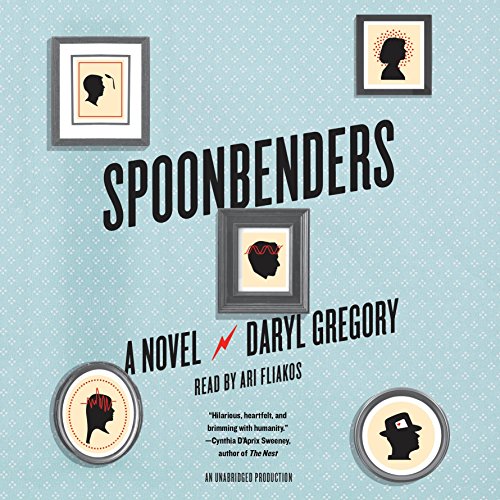 In his newest work of speculative fiction, World Fantasy and Shirley Jackson Award–winner Gregory introduces the dysfunctional Amazing Telemachus Family, all but one of whom possess some variation of a seventh sense. The outlier is grandfather Teddy, con man and cardsharp. His deceased wife, Maureen, was a true psychic, as is his son Buddy. His older son, Frankie, is telekinetic, his daughter, Irene, a human lie detector. Her young son, Matty, takes out-of-body journeys. The author uses this mix of fantasy and family life to present a multigenre mash-up that includes a couple of romances, scams, a coming-of-age tale, government duplicity, gangsters with guns, and, not least of all, genuine magic. Narrator Fliakos vocally underlines Teddy’s love for Maureen, Frankie’s frantic attempts to avoid the wrath of mobster Nick Pusateri, Irene’s difficulty living in a world of liars, Buddy’s inability to cope with his knowledge of the future, and the poignancy of Matty’s sweetly sad love for his cousin, and the greasiness of CIA Agent Smalls’s deal with the family. In flashbacks, Fliakos gives Maureen the voice of the most caring, dependable psychic wife a fast-talking wheeler-dealer could want. A Knopf hardcover. (June)
close
Details