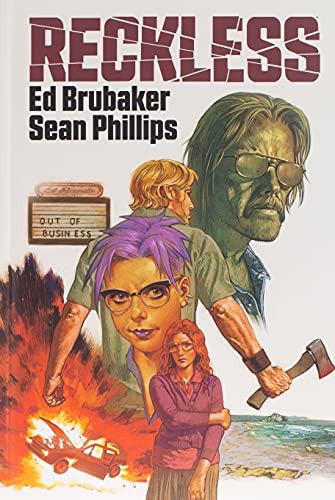 The sure-footed latest hardboiled thriller from Brubaker and Phillips (Criminal) hits the ground running, delivering both style and substance in its sunny 1980s California setting. Ethan Reckless, a freelance fixer and odd-jobs man operating out of an old movie palace, gets a call from an ex-girlfriend that drags him back to his tangled past in the hippie counterculture. His attempt to help his ex recover stolen money brings him up against the FBI, the CIA, left-wing terrorists, plus old friends and enemies. Reckless is a quintessential noir hero, a jaded man who has countless secrets and a weakness for troublemaking women, and Brubaker and Phillips hit familiar beats with each plot twist and turn. An undercurrent of political commentary and judicious use of historical details, like the CIA’s domestic spy program, lend welcome heft to the pulpy proceedings. Phillips drenches the pages in warm, saturated colors that provide an ironic contrast to the characters’ shady doings. This slick offering from an über-talented team, the first in a series, promises good things to come. (Dec.)

Correction: An earlier version of this review incorrectly stated the book is part of a trilogy.