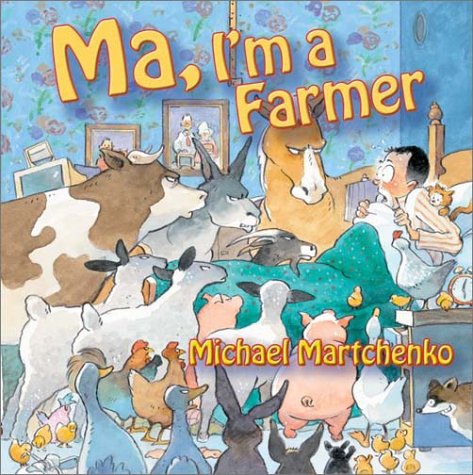 Martchenko's ( ) slight story introduces a computer operator who spends his days staring at a screen in an enormous office filled with dozens of tiny cubicles. "It's boring, and it's making my eyes go square," complains Fred, who phones his mother to announce that he plans to buy a farm. On the first morning in his new life, Fred awakens to find animals flanking his bed. A neighbor and his grandson, Willy, explain to the newcomer that he must tend to numerous early-morning chores—including feeding his hungry animals. After days of backbreaking work, fatigued Fred seems ready to sell his farm and return to the city—until Willy comes up with a plan to build computer-run machines to perform the chores. The system works fine for 10 seconds, then blows out the electrical power in the entire country. Rather than revert to the old-fashioned method of farming, Fred tries another technological solution, with predicable results. Adults may find more humor than will kids in this rather sluggish, grownup-centered story. Youngsters will be most entertained by Martchenko's zany, bustling watercolor cartoons, filled with funny flourishes, many entailing the silly antics and facial expressions of the barnyard denizens. Ages 4-7.