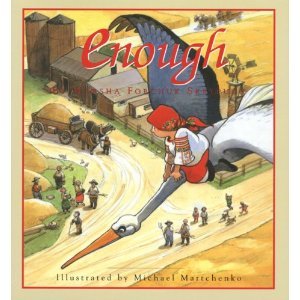 This wordy fairy tale by the creators of is rooted in history; according to an introductory note, the setting is "during the Famine instigated by Stalin in 1930's Ukraine." But the volume suffers from the tall-tale quality of the narrative and the exaggerated characterizations. After one of "the Dictator's soldiers" appears on the farm where Marusia lives with her father, he announces, "Your wheat and your farm now belong to the People." He and his compatriots confiscate the crops of every farmer in the village. But Marusia hides one sack of grain that keeps them all alive during the hard winter, and plants seeds from which a magic stalk grows, attracting a large stork. The bird carries her on its back to a land of plenty so she can restock her village's supplies. In a predictable turn of events, another of the Dictator's soldiers makes a similar journey on the stork's back, but hordes so much grain that he and his sacks tumble off into the ocean. Unfortunately, the prose is often overblown when coupled with the oafish characters depicted (e.g., it is "the Dictator's wish that this land be filled with graves"). The villains—and even the victimized Ukrainians—appear as caricatures in the artwork, which does little to vitalize this heavy-handed narrative. Ages 6-8. ()