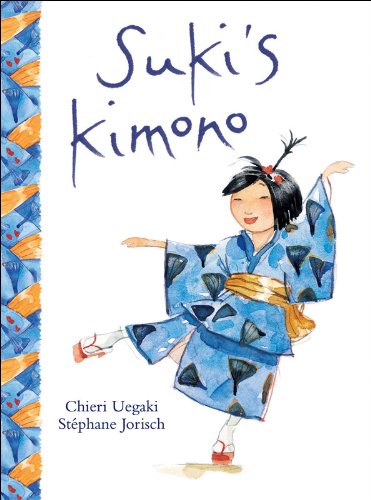 In Uegaki's appealing first book, a first-grader prefers to face scorn from her classmates rather than give up her beloved kimono. Stylish illustrations by Jorisch ( ) add pizzazz. Suki's grandmother buys her the beautiful blue kimono and takes her to the summer festival, where they dance together to Japanese music. Here Jorisch's urban backdrops give life to the pleasures and surprises of a small ethnic enclave in a good-size city. When Suki wants to wear the kimono on the first day of school, her older sisters' disapproval and warnings do not deter her. Jorisch's lightly tinted but gaily drawn watercolors show Suki as she strolls along with her arms out and her sleeves aloft, "like she'd grown her own set of wings"; she's blissfully innocent of the poking and giggling going on around her. When their teacher, Mrs. Paggio, asks the class about their summer vacations, Suki, by now aware of other children's reactions, describes the festival, then demonstrates the festival dance right in front of everyone. Jorisch captures the moment: Suki performs the steps in a series of vignettes, then waits alone, with scarlet cheeks, on the left-hand page while her classmates watch from desks on the right. Mrs. Paggio applauds, "and after a moment, so did the entire class." Given the true-to-life character, readers may feel like applauding, too. Ages 5-8.