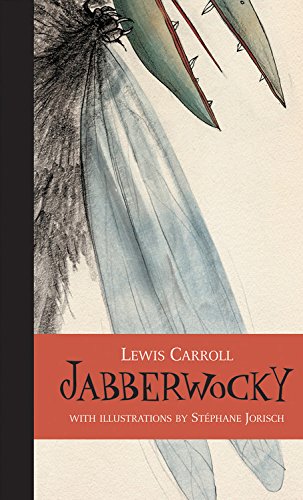 Jorisch ( ) recasts Carroll's nonsense comedy as a dystopia, setting it in a claustrophobic city among grim-faced people. The introduction lends an ominous note to Carroll's "All mimsy were the borogroves,/ And the mome raths outgrabe." In a storefront window, rows of televisions display a news announcer in a military uniform. Three amputees, whose peg legs and patched winter coats imply wartime poverty, lean on crutches and watch the broadcast. In a local dress shop, another TV pictures some creature's dinosaur-like jaws, while a man in a peaked soldier's cap urges a tailor to "Beware the Jabberwock, my son!" The tailor becomes the unlikely hero: he takes his "vorpal blade in hand" and seeks his manxome foe in the tulgey wood. The Jabberwock never appears in its entirety, and a splash of blood suffices to indicate its offstage demise (however, the book closes with an image of three children poking at a squirrel-size, beheaded animal near a curb). Jorisch zeroes in on death and meditates on monstrosity. Not only is the title creature slain, but the funeral of the tailor's father closes the narrative. Like the satirical cartoons of Saul Steinberg or George Grosz, Jorisch's spidery ink-and-pencil images suggest conflict and absurd despair; his swooping bird's-eye views and unsettling world-gone-wrong themes echo the surreal work of Shawn Tan or Dave McKean. "Jabberwocky" is an ambiguous tale, but one with a generally upbeat ending. Jorisch leaches it of whimsy and emphasizes its darker side. Carroll fans will miss the original's nuanced playfulness. Ages 8-up.