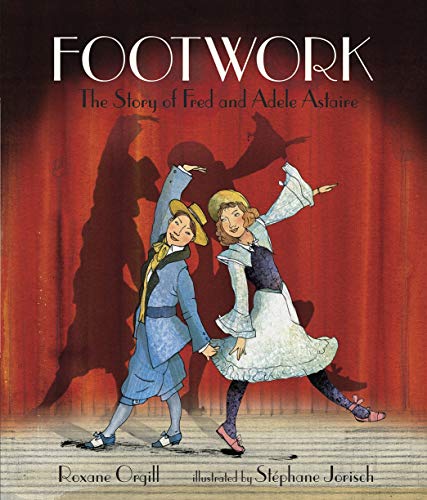 Footwork: The Story of Fred and Adele Astaire

The uninitiated might be surprised to see a name other than Ginger's alongside Fred Astaire's, but as Orgill's ( ) detailed text recounts, Fred spent almost the first three decades of his career paired with his older sister, Adele, his “one true friend.” A lengthy, briskly moving narrative chronicles the siblings' bumpy rise to stardom, from a New York City dance school to the vaudeville circuit to Broadway. The author gives equal billing to the performing duo's successes and setbacks (“Once they shared a program with a group of seals who did tricks”), and she maintains a level, steady-as-she-goes tone. Jorisch's ( ) winning, Art Deco–flavored ink-and-watercolor illustrations, on the other hand, share in some of the Astaires' eventual glamour and verve as the artist eloquently conjures early-20th-century stage life. Fluid, willowy lines depict festooned dancing frocks, packed performance halls and even an impromptu dance-off with Bojangles in a back alley. Readers glimpse Fred and Adele crying in a dressing room, and, much later, looking out over a standing ovation. In one notable spread Fred, outfitted in mauve, and Adele, in powder blue, execute twists and turns with flair in four vignettes against an olive-brown backdrop resembling a heavy stage curtain. Informative, with spry visuals, the story projects an element of sophistication with the deep wine-red hues that inhabit most scenes and the title's font, which recalls that of the . A class act. Ages 6-10.