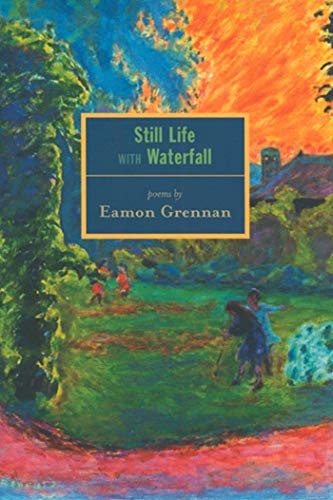 "Uncertainly there, but there,/ smell of lindens after rain,/ then nothing/ but heaped earth, fallen branches,/ the animal/ scrabbling to survive." Grennan's new poems take up the regular small catastrophes of the natural world—frost, fire or predators with their small, doomed prey, like the sparrowhawk that "simply plucks/ like a ripe fruit the stopped robin, whose two or three/ of terminal surprise twinkle in the silence/ closing over the empty street...." These are sometimes metaphors for human relationships, but more often reminders of human mortality and vulnerability. Indeed, there's a strong sense of foreboding in these pieces, as well as a search for a larger continuity beyond the routine natural calamities. "I keep my eyes shut fast... and hear nothing at first, nothing, and then—as if out of the egg of silence—small sounds hatching:/ thin fluting of a goldfinch; song sparrow's single note/ of warning; in the distance a hawk's cry broken off;/ crackle of one twig slipping free of another; the tide's/ perpetual faint susurrus, no end to its run-on sentence,/ and that dry whisper as the sand in sleep keeps shifting." The relationship of Grennan's speaker to this natural world is ambivalent—occasionally an agent of destruction, but usually an observer, watching "through an accidental crack in the curtain" a world that seems indifferent to observation or consciousness. Readers will find few surprises within it, but Grennan's "unwavering concentration" (as one poem puts it) is convincing.