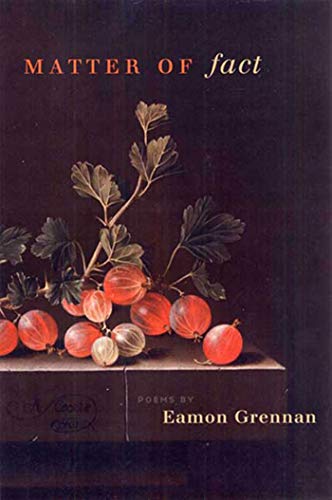 “[T]he neon dawn-screech/ of skunk cabbage” or the sun's “calligraphy of angle-spines/ and snag arms”: the facts here are filtered through the senses of someone word-drunk who's raised himself on Hopkins and Celan, Stevens and Shakespeare, as well as his immediate Irish forbearer, Seamus Heaney. The matter is the world—flowers, airplanes, traffic, birds, violence, language—and the sound and sense Grennan ( ) can make of it in this his seventh collection: “I find myself sounding such things out/ by skin-instinct or some sort of soul-braille,” trying to swim across “the tidal turbulence of the senses.” Whether in neat stanzas or bits of prose, Grennan's lines and sentences are thick with sound, but his syntax often pushes the reader rapidly. Central to the book's final section is a brief suite of poems that artfully walks a perimeter around 9/11: a speaker safely riding a plane, flashes of smoke and names, the struggle to imagine “That we might go on,” and snow finding “the only ground left to stand on.” Later, a thrush becomes a symbol for living through trouble, its “songs raised over wreckage when the dust has settled.”