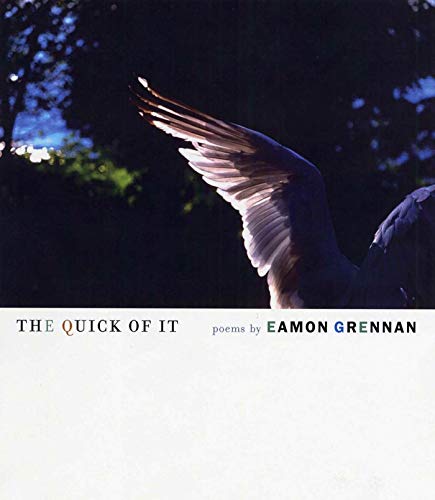 THE QUICK OF IT

Composed of untitled 10-line poems, Grennan's sixth collection gets down less to brass tacks than to elementals: "So this is what it comes down to? Earth and sand/ Skimmed, trimmed, filletted from rocky bone... protestant/ To the pin of its terminal collar." Birds make regular appearances, not only as symbols of flight and freedom, but also of mortality: "Still I can smell / The dead—till darkwings open wide and rise, cutting things off." While Grennan indisputably writes a conventional lyric of man's insignificance in the face of nature, he is rescued from neoromanticism—and from the label of "nature poet"—by a kind of unswerving pessimism. The subjects of these tightly composed poems shift—art, domesticity, cows in a field, tulips, insomnia—but they convey the same message, over and over: the need to reconcile oneself to the fact that we are only visitors to this world: "Up to its belly in snow, the cat watches some bird or famished mouse/ Make its own cold life minutely happen." While its tones are lovely and clear, the book's compulsive restatement of mortality and acceptance sounds the same note over and over. Ask not for whom the bell tolls.