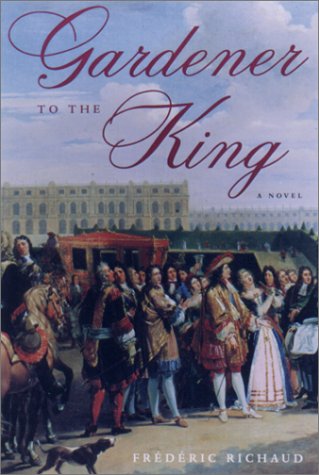 GARDENER TO THE KING

A refreshing departure from the sweeping historical novel, Richaud's slight but charming tale depicts the swirling world of Louis XIV's court as seen through the eyes of Jean-Baptiste de La Quintinie, the king's detached and philosophical gardener. La Quintinie, a little man with a mysterious past—he abandoned a promising law career to become a horticulturist—is an odd figure at the palace of Versailles, where flatterers and courtesans bask in the glow of the Sun King. Only La Quintinie seems able to escape the decadence of palace life, taking refuge in the beauty of his gardens and the changing of the seasons. Despite his reluctance to enter court, the little gardener strikes up a respectful friendship with the king, who takes genuine delight in his flourishing gardens. But La Quintinie much prefers his rustic routine to the fickle falseness of the city. When summoned to Paris at the behest of the king, he attends a masquerade ball where guests don outlandish disguises and gossip cattily about each other. Horrified, La Quintinie returns to the countryside and begins to involve himself in the lives of the impoverished workmen and peasants who live near Versailles, teaching them to garden and delivering seeds and manure to their homes. When he strikes up a correspondence with political radical Philippe de Neuville, La Quintinie must confront the injustice of the king's attitudes to the poor—and his own complicity with the king's regime. Constructed of anecdotes, snatches of conversation and excerpts of the letters written by La Quintinie and Neuville, this novel is a contemplative read. Readers desiring a brief, elegant immersion into 17th-century France will find it to their liking.