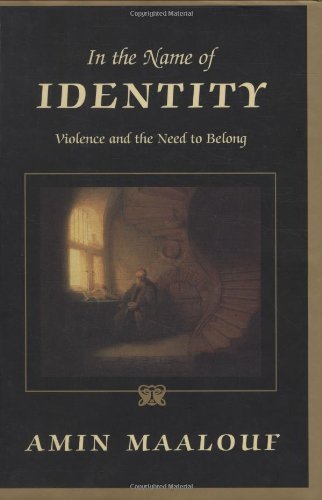 IN THE NAME OF IDENTITY: Violence and the Need to Belong

"A life spent writing has taught me to be wary of words. Those that seem clearest are often the most treacherous. 'Identity' is one of those false friends," begins this compelling, provocative and persuasive study of the dangers of personal, religious, ethnic and national identities. Arguing that these identities allow and often encourage people to engage in horrific acts of violence upon those with different identities, Maalouf offers a philosophical exploration of what a culture without entrenched identities would be like. Lebanese by birth, Maalouf is a journalist and award-winning novelist () who has lived in France for 25 years. Writing from a position of multiple identities ("I am posed between two countries, two or three languages, and several cultural traditions"), he asserts that many people are in similar situations. With intelligence, wit and moral fortitude, Maalouf accessibly and eloquently addresses such complicated issues as how we judge religious traditions that have embraced violence and brutality; modern manifestations of "otherness"; how language facilitates nationalism; and the contradiction between stark identity-based political conflicts and how the same identity-based cultures can be shared by different groups. Maalouf does not naïvely demand that personal identities be dismissed, but suggests a number of ways in which identities can remain intact and might form not a "meaningless sham equality" but "rather the acceptance of a multiplicity of allegiances as all equally legitimate." Utopian realism at its finest, Maalouf's thesis has a slim but vital potential to be realized. This is an important addition to contemporary literature on diversity, nationalism, race and international politics.