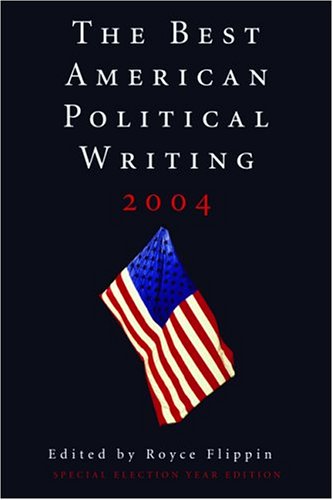 In culling articles mostly from major news conglomerates and glossy monthlies like , Flippin notes in his preface that his main selection criterion is "particular, reasoned insight into the complex political issues facing our country," where the chosen writers "value clarity over cant, reason over hype, and honest debate over manipulative hectoring." That ideal comes close to being realized in some of the 48 articles here (as with Nicholas Lemann's profile of Karl Rove); with six pieces from the , six from the and four each from the and the , tempered house styles dominate. The majority of the pieces come in at four to five pages, and all are preceded by a brief scene-setting paragraph. "The Tax Cut Con" by Paul Krugman and "Generals Weary of Low Troop Levels" by Robert Novak represent familiar positions clearly, while James Kurth's "Iraq: Losing the American Way" and Jonathan Schell's "How to Get Out of Iraq" take less popular positions cogently. Flippin threads in a few pieces from the and the (Robert Kagan and William Kristol on "The Right War for the Right Reasons"), but the whole leaves one wanting a little more of the best manipulative hectoring.