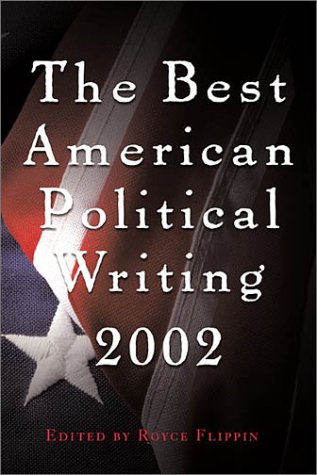 For this first in a projected annual series, the events of 2001 generated far more drama and political debate than usual, broadly reflected in this collection. The most interesting pieces are those that, when read together, create a point-counterpoint effect. For example, liberal lawyer Vincent Bugliosi vigorously attacks the five-justice Supreme Court decision in the Florida vote-count case because, among other things, the Court failed to articulate a credible constitutional basis for its decision. In contrast, Charles Krauthammer, the conservative columnist, sees the Supreme Court's role as fundamentally political and finds nothing objectionable in the decision. Yet the section on the election overall feels surprisingly dated. Flippin (editor of ) does for the most part offer pieces that are still timely, such as an excerpt from Barbara Ehrenreich's bestselling book on her attempt to live on a minimum-wage salary. The retrospective gives readers a chance to do some score keeping: Seymour Hersh, writing about pre-September 11 intelligence failures, quotes several people who predict the as-yet-unrealized ouster of CIA head George Tenet, while Bill Keller writes on Colin Powell's growing influence in the Bush administration—influence not much in evidence today. Flippin has chosen wisely and benefited from an expansive definition of political writing. Heavyweight thinkers Arthur Miller, Henry Kissinger and Jeane Kirkpatrick are featured along with media stars such as Jeff Greenfield, Molly Ivins and Paul Krugman. The pieces also come from a wide range of books and magazines, including the , the and the , but also less mainstream sources such as Salon.com, the and .