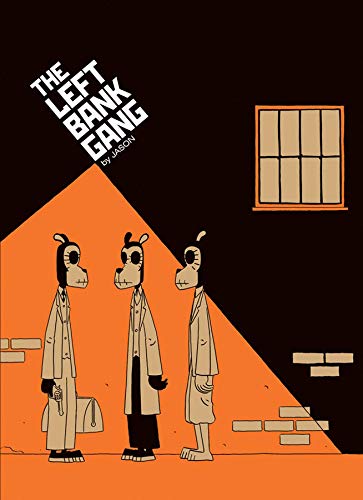 Using only a few pages, Jason manages to craft two different stories that happen to star the same characters. The characters are F. Scott Fitzgerald, Ernest Hemingway, James Joyce and other literary giants as they live their legendary bohemian lifestyles in Paris. Except in this story they aren't writers but cartoonists, with comics being the height of culture in this alternate world. Not only are these writers now comic book creators, they are distinctly comic book characters as Jason has transformed them into his trademark anthropomorphic dogs and birds. As these characters contemplate their lives, Fitzgerald in particular is down and out. The book is a comment on the literary acceptance comics have been getting in recent years. All the anxieties these creators have to deal with are just as relevant to writers and cartoonists now as they were for the Lost Generation. Then, in a rather abrupt twist only Hemingway could be responsible for, the group decides to rob a bank, turning into a Tarantinoesque caper complete with different perspectives on the same chaotic event. Jason's clean, comfortable art and droll storytelling keep everything together through all the stylistic flights of fancy.