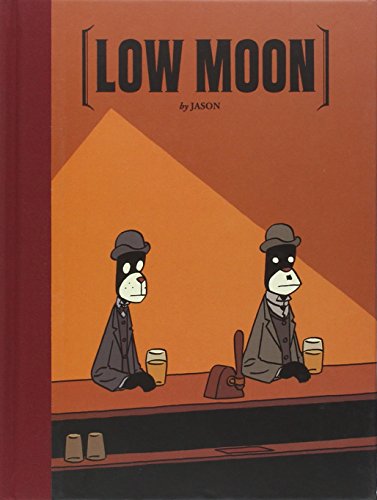 The longest American book to date (and first hardcover) from Norwegian comics master Jason, is actually a collection of five marvelously deadpan short stories. The expressionless anthropomorphic animals who populate his comics milk understatement for all the laughs it’s worth; they manage to look bored and detached even when they’re brandishing swords or exploring alien planets. (Within the context of one of these stories, “Yeah, sure. Why not?” is a punch line.) The core of Jason’s breed of humor is his protracted silences—the uproariously uncomfortable moments when his characters are standing around waiting for disaster to strike. A couple of these stories are one-joke twist-ending pieces about the intersection of lust and murder, but the other three are keepers. “Low Moon” itself, initially serialized in the , gnarls every convention of the western into knots—the sunrise showdown is a chess match, for one thing, and a bar fight breaks out over an inferior cup of espresso. “&” presents parallel tales about two people who do terrible things to get what they think they want. And “You Are Here” is another genre-bender, a decades-spanning micro-epic about a damaged family alternating between domestic drama and impossibly low-key space opera.