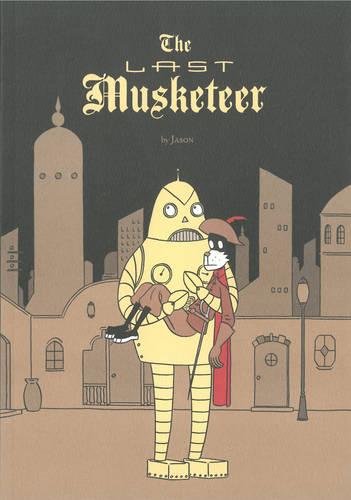 Having already plundered Hitchcockian wrong-man scenarios ( ), zombie flicks ( ) and alternate history paradoxes ( ) for his own sardonic purposes, Jason goes this time for a multigenre mash-up that proves to be one of his most enjoyable books yet. In , Athos is still alive in modern-day Paris, a drunken has-been unable to let go of past glories. He proves surprisingly handy, though, at defending Earth after overpowering a couple of invading Martians, hitching a ride back to their planet and taking on the alien army singlehandedly. Swordplay, dungeons, a princess, ray guns and daring escapes follow, all drawn with Jason's usual sharp and colorful vibrancy. In the hands of most other comic artists, mixing up this goofy Dumas riff with Edgar Rice Burroughsâ€“style pulp (and caped costumes right out of ) would have seemed like desperation, overreaching or mockery. But as done by the supremely confident Jasonâ€”who has always paired a cool abstraction with a sharp comic streakâ€”it comes off as a genuinely appreciative lark, albeit one veined with a rare sense of mortality.