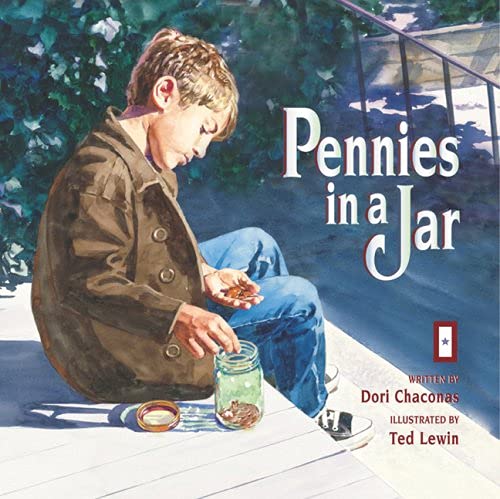 Pennies in a Jar

Lewin's ( ) stunning, realistic watercolors are the highlight of this otherwise muddled WWII home front story. The young narrator's father has been sent overseas, and the world feels scary—even the placid horses that pull the trade wagons through the streets look intimidating. But when an itinerant salesman offers to take the boy's picture on a pony for 50 cents, the boy realizes that he's been given the opportunity both to confront his fears and to create special birthday present for his father. Unfortunately Chaconas ( ) never achieves a convincing voice for her hero. The prose feels ponderous and self-conscious; it's hard to believe that a kid would use a word like “nicker” when talking about a horse that frightens him. The story's epiphany is delivered with an equally heavy hand: even the rent-a-pony is saddled with the name Freedom (“Dad went away to the war to fight for freedom,” notes the boy). But Lewin's illustrations compensate for many of the story's shortcomings. The intensity of the lighting, the cinematic compositions and the emotional nuances of the characters' expressions steer clear of sentimentality as they summon up a vanished past. Ages 6-10.