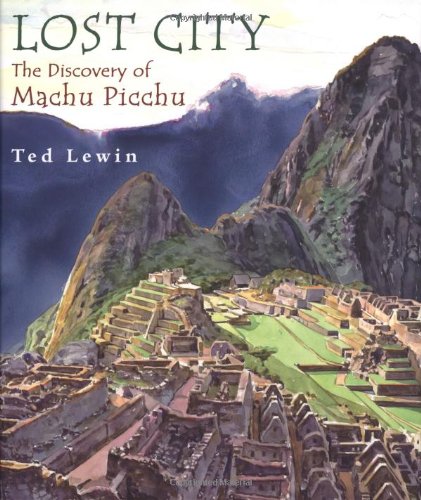 With lush and detailed watercolors, Lewin guides readers high into the almost otherworldly mountains of Peru. In retracing the steps of Hiram Bingham, who in 1911 searched for the lost city of Vilcapampa and discovered the 500-year-old Incan ruins of Machu Picchu, he balances a compelling visual chronicle with sure storytelling. The narrative alternates between Bingham's treacherous trail into the dense, snake-infested jungle and the premonitions of a Quechua boy who has dreamed of "a tall stranger carrying a small black box" (the box is Bingham's camera). The professor's quest begins 60 miles south in Cusco, where a gorgeous, sun-dappled ancient wall may excite readers' interest in archeology: "Right here was the most beautiful stonework he had ever seen—huge stones cut so perfectly that not even a razor blade could be slipped between them. The Inca had no iron tools to carve them, no wheel or draft animals to move them.... How had the Inca built them!" A sense of intrigue permeates another scene in a dark cantina, where Bingham confers with locals, their faces unseen. Wearing an Indiana Jones–style fedora, Bingham hunches over intently, his face half-shadowed in the bright sun. A perilous trek and a fortuitous meeting with the boy in the jungle lead Bingham to the ruins, the significance of which are explained in a helpful afterword. A rewarding journey. Ages 5-9.