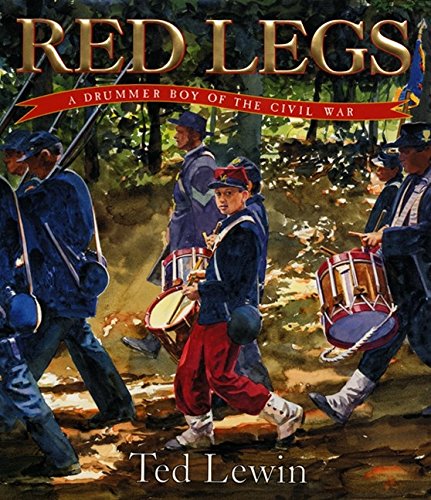 RED LEGS: A Drummer Boy of the Civil War

Lewin (; ) leads readers to the heart of a military skirmish in this emotional picture-book look at a Civil War reenactment. Young Stephen accompanies his father to a battle reenactment in which the nine-year-old plays the role of a drummer boy for a Union unit called the Red Legs, in honor of their red uniform pants. As Union and Confederate soldiers clash on the field, all the drummer boys look on from a nearby hill. Finally, the Confederate soldiers "send off a terrible volley," and Stephen takes a "fatal" bullet in the chest before the fighting ceases and Stephen's father escorts him off the field. An afterword explains that Lewin's brief yet stirring text was inspired by the experiences of a Brooklyn boy named Stephen Benjamin Barrow, who fought in the war from 1862 to 1865 and once lived very near Lewin's current home. Sun-dappled watercolors depict groups of men and boys marching into war with solemn and determined faces. On two central spreads, Lewin creates several thin scene strips (akin to viewing a film in wide-screen format) to convey the awesome movement and power, and even to suggest the sound of soldiers firing rifles and cannons, brandishing sabers and charging on horseback. The participants' reverence throughout telegraphs a true passion for history—one that may be ignited in young readers via this volume. Ages 6-10.