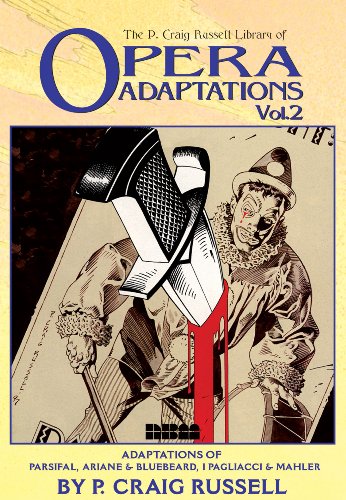 Cartoonist Russell has been drawing adaptations of the operatic repertoire for close to 30 years, and this volume surveys a wide historical selection of his opera comics. Russell's mad passion for the stories and images he's adapting helps him pull off the obviously tough act of showing opera without music. The 1970s version of Wagner's that opens the book (and is its weakest work) was done around the same time that Russell was illustrating superhero and science fiction comics for Marvel. Even then he was drawing on fine art (especially turn-of-the-century aesthetics) for his compositional ideas. The prize of the book is a long, lush, magisterial adaptation of Dukas's , originally published in 1989. It's one of the most visual of operas, to begin with—half the plot has to do with the play of light—and Russell opens up and roars like a star tenor, fiercely stylizing everything from the opera's architecture to its sunbeams and indulging in wordless passages that let him cut loose with enormous spectacles. A b&w 1998 take on seems cramped and rushed, but the more experimental fantasias on two Mahler songs that round out the volume are small gems: the less Russell has to address the intricacies of plot, the more he can indulge his visual imagination.