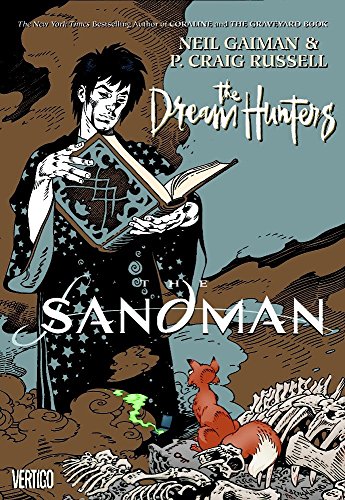 The Sandman: The Dream Hunters

Gaiman's novella , previously illustrated by acclaimed Japanese artist Yoshitako Amano, has been reimagined by award-winning artist Russell. This new release celebrates the 20th anniversary of Gaiman's and turns the original prose from 1999 into a graphic novel. The original blended Gaiman's mythology of the Dreaming with traditional Japanese myths and legends to tell the tale of a fox who makes a wager to dislodge a young monk from his home, losing her heart in the end and causing the intervention of the King of All Night's Dreaming. The pairing of Gaiman and Russell—previous collaborations between the two have won four Eisner Awards—is as strong as ever; together they develop the tale further, visually expanding upon Amano's original designs. The hardcover—sure to please the legions of Gaiman and Sandman admirers—also includes commentary and a cover gallery including variant covers by Russell, Yuko Shimizu, Mike Mignola, Paul Pope, and Joe Kubert.