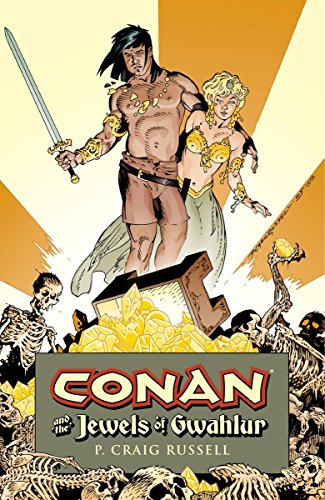 Conan and the Jewels of Gwahlur

The latest in the many tales of Conan kicks off with his mercenary side, as he sets out to steal the Jewels of Gwahlur. The story starts slowly—too slowly, in fact. The only thing to hold a non-diehard Conan fan's attention in the first 25 pages is the art—Russell is an acknowledged master and his work here approaches the best in fantasy comics art. Conan sneaks into the palace of Alkmeenon, only to find the slave-girl Muriela impersonating the oracle of the dead queen Yelena. Together they try to trick the priests out of the jewels, but only after Muriela is kidnapped does the story get interesting. Russell's strong point is that he's content to leave certain things—the demon servants of the priests, the jewels themselves, the magic preservation of a corpse—as mysteries. In some ways, Conan resembles old, old travel writing, albeit travel writing to a fantastic world: it chronicles rather than explains. The plot gets fun at the end, hinging on character, not action. Despite their loincloths and metal bras, the characters are fully –formed, and Russell's art is always worth savoring. (Jan.)