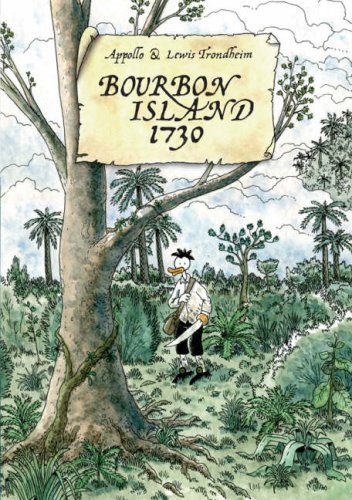 This eccentric but illuminating historical drama draws on the peculiar realities of the end of the golden age of maritime piracy (and its intersection with the slave trade), and spins them into a compelling, engrossing story of people considering whether their cause is worth more to them than their lives. On an island near Mauritius in the Indian Ocean, the pirate captain Buzzard has been captured, and the escaped slaves and pardoned pirates who populate the hills are sparring over the risks of trying to free him. Meanwhile, a handful of Europeans, including a plantation owner’s daughter whose head is filled with fantasies of being kidnapped by Maroons, are drawn into the old order’s collision with colonialism. Trondheim’s loose, doodly visual style takes a bit of getting used to, especially his habit of drawing all his characters as anthropomorphic animals—in a book where several major characters are ornithologists, it’s peculiar to see one of them as a duck—but his storytelling instincts are unerring. This is a small gem of a book, and its characters are memorable on their own, even as they symbolize the historical forces of their time.