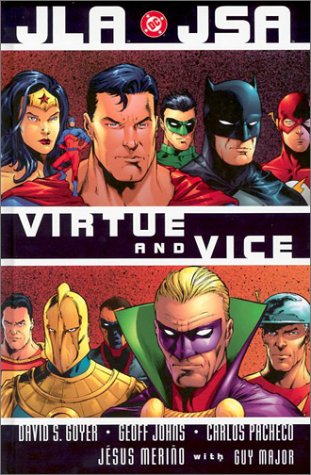 Although well-done, this mega–team-up story is somewhat routine. It's natural for a publisher to let superheroes make guest appearances in one another's comics, and the idea of grouping several into a squad of superpowered do-gooders follows irresistibly. The Justice Society of America (with 1940s superheroes like Captain Marvel and Dr. Mid-Nite) was DC's first major stab at a superhero team, before superhero comics faded away in the early '50s. The Justice League of America is the present-day version, featuring some new characters and some who never disappeared (like Superman, Batman and Wonder Woman). DC decided to unite the two groups periodically. The attractions are obvious: comics fans get to see the characters pictured on the same page in dynamic interaction. During a party, Wildcat arm wrestles with Green Lantern, while Plastic Man stretches across the room to ogle Power Girl's cleavage. And there's terrific conflict. When different versions of the characters (such as Superman and Captain Marvel) are present, all sorts of power comparisons are possible. A demonic alien conqueror causes several of the heroes to be secretly possessed by the seven deadly sins, pitting one group against another (e.g., Power Girl is possessed by Lust; Batman by Anger). The writing is smooth and the scene in which Dr. Mid-Nite exorcises the demon of rage from Batman is unexpectedly moving. The art is professional and a double-page spread showing the united band of superheroes plunging forward is a rouser. Nevertheless, the story feels stale. It's been done before and will be done again.