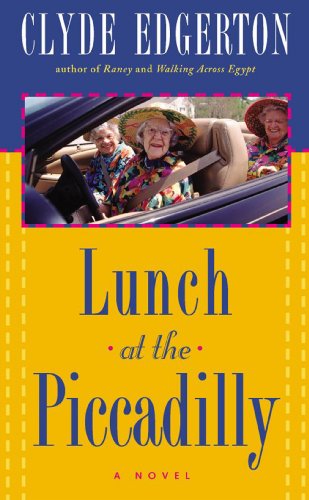 LUNCH AT THE PICCADILLY

Edgerton writes with warmth about the plight of the elderly in his latest, an ensemble portrait that tracks the ups and downs of a group of nursing home residents at the Rosehaven Convalescent Center. The central figure is contractor Carl Turnage, who devotes most of his time to caring for his dotty, eccentric aunt, Lil Olive, after a fall puts her in convalescent care. The friendly, rambunctious Lil quickly strikes up several friendships at the home, organizing a series of cute but ill-advised adventures as the various patients battle to keep their driving rights and other privileges. Turnage, meanwhile, becomes involved in an adventure of his own with another resident, a flamboyant preacher-cum-musician named L. Ray Flowers who talks him into playing bass in a duo after he sets some of Turnage's lyrics to music. Edgerton hits the mark with his quirky characterizations, and his sympathy for his subjects is evident as they struggle to retain their dignity through their twilight years. Much of the humor is stuffy and outdated, and the comic material involving elderly driving is off-key. But Edgerton compensates with a strong finish: Lil is suddenly hospitalized, and Turnage is forced to come to terms with her mortality, even as a lurid incident involving Flowers's flagrant behavior with the female residents forces another crisis on him. This underplotted novel isn't one of Edgerton's best efforts, but it remains a solid, touching treatment of a neglected subject.