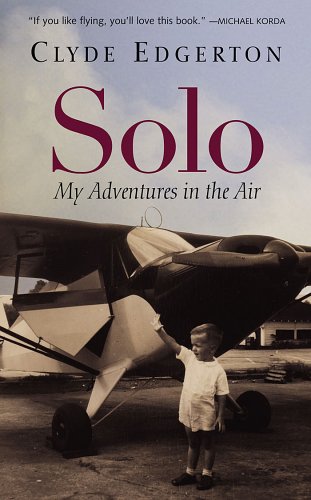 Solo: My Adventures in the Air

Beginning with a fateful trip to a local North Carolina airport at age four and ending with midlife adventures in a small private plane, novelist Edgerton ( , etc.) turns to autobiography, using his lifelong relationship with aircraft and flying as his navigational center. Four years in UNC's air force ROTC led to service in 1970–1971 as a forward air control pilot in Vietnam, flying missions over the Ho Chi Minh Trail out of Nakhon Phanom Air Base in Thailand. "I do not agree with everything the United States is doing in V.N.," he wrote in a letter home, "but I do believe we should be there." (Like other former believers in the domino theory, Edgerton, who was decorated for his role in a rescue mission, later bitterly changed his mind.) Edgerton presents his flying life dryly and clinically, and includes a great deal of aeronautical detail. The book ends with a paean to his Piper Cub, bought in the late 1980s, and more reflections on Vietnam. Much of the book reads as if Edgerton were sifting the technical details of flying and flight for clues into his own character without quite being aware of his audience. Buffs will get it, but others will be left on the tarmac. .