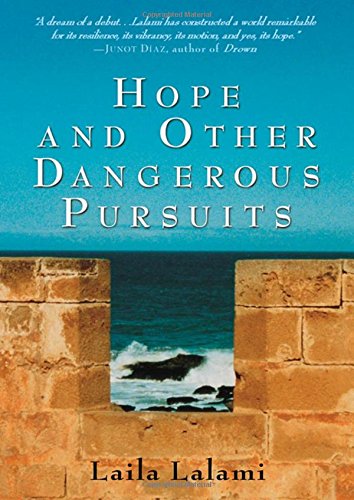 Hope and Other Dangerous Pursuits

The four main characters of this linked series of fictional profiles are connected by a single goal: the desire to emigrate from Morocco to Spain, where there are jobs. Lalami, author of the literary blog moorishgirl.com, opens her book with the four (along with several others) illegally crossing the Strait of Gibraltar in a tiny inflatable raft; when it capsizes near shore, it is everyone for themselves. The next four chapters flash back to their varying lives in Morocco: Faten, a lower-class, college-aged woman appears only through the eyes of middle-class friend Noura's parents, who are horror-stricken as Noura falls under Faten's influence and begins wearing the hijab; Halima, a financially struggling mother who, with her children, is escaping an abusive marriage; Aziz Ammor, who hopes to support his wife by finding work in Spain; and Murad, a college graduate who makes pocket money by taking Paul Bowles fans on informal tours. The four following chapters detail, with sensitivity and journalistic clarity, their lives after the trip across the Strait. Less a novel than a set of finely detailed portraits, this book gives outsiders a glimpse of some of Moroccan society's strata and the desperation that underlies many ordinary lives. .