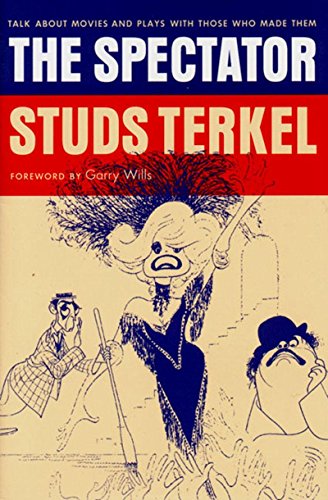 The Spectator: Talk about Movies and Plays with the People Who Make Them

A collection of interviews with screen and stage actors, directors, playwrights and critics, Terkel's latest richly entertaining oral history is a departure from his bestselling interview books on weightier themes (Working; Hard Times; Race). Here, Terkel offers interviews--many of them reading almost like monologues, Terkel says so little--first heard on the Chicago radio program he has hosted for the past 45 years. Many of the exchanges feel dated, and there is an awful lot of chitchat. Nevertheless, the book's cast of characters is stellar--Edward Albee, Eugene Ionesco, Lillian Gish, Zero Mostel, Pauline Kael, Marlon Brando, Uta Hagen, Tallulah Bankhead and August Wilson, among others--and Terkel has a knack for pushing buttons, opening floodgates, capturing his subjects in illuminating moments. ""I've always regarded myself as an incomplete person,"" says Tennessee Williams in a particularly revealing passage. ""Consequently, I've always been interested in my kind of people: people that have to fight for their reason... people who come close to cracking."" Arthur Miller explains how the nation has gone soft: ""In the '30s, people, in order to believe they were real Americans, believed they were responsible for their own fate."" We also get Agnes DeMille on choreographing Oklahoma, Ian McKellen on the modernness of Shakespeare, composer/ pianist Eubie Blake (who wrote the first all-black musical, Shuffle Along) on his parents' tribulations as slaves and Kenneth Tynan on British class prejudice. A disarming, invigorating look at show biz, this quirky book closes, on a fittingly eclectic note, with Burr Tillstrom, creator of the TV puppets on Kukla, Fran and Ollie--which he duly impersonates during the interview. (Sept.)
close
Details