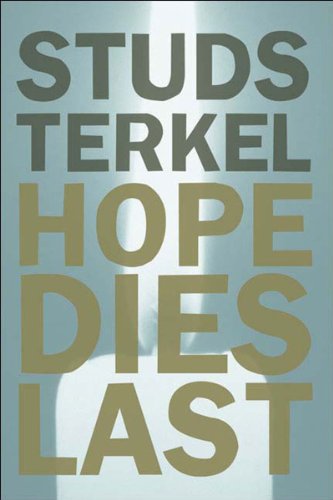 Turning to a subject more elusive than those of his earlier oral histories (work, race, WWII, the American dream and so on), Terkel focuses here on hope as the universal detritus of experience. Terkel worries that Americans are losing hope and consequently losing a collective call to social activism for which hope, he feels, is requisite. Since the book progresses historically, its collective voice grows younger as the book advances toward the present. It is admonitory to note the dampened hopes of older generations. Brig. Gen. Paul Tibbets (who piloted the over Hiroshima) dismisses the possibility for peaceful resolutions to post–September 11 conflicts ("We've got to get into a position where we can kill the bastards"); John Kenneth Galbraith, reflecting on the corporate malfeasance of Enron and WorldCom, admits that at his age (94), "there are no untrammeled hopes for the future"; and Adm. Gene LaRoque states simply, "Hope in my view is a wasted emotion." This pessimism, thankfully, wanes as Terkel turns his attention to younger subjects, such as Dr. David Buchanen, who works tirelessly to aid the homeless, and Leroy Orange, whose recent death row pardon has inspired him to want to "talk to at least one youth and turn his life around." Here hope resounds through the pages. Early in the book, Tom Hayden says, "I live now with one goal: to try to learn to be the kind of elder who was missing when I was a kid." With that goal and the hopefulness of the voices that round out this book, hope may well be immortal.