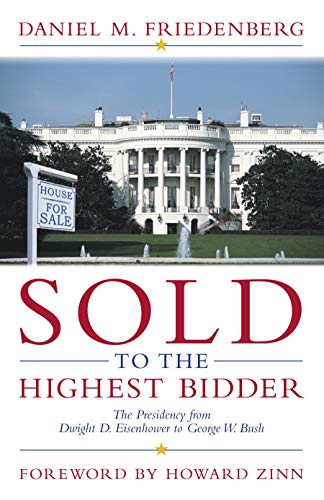 SOLD TO THE HIGHEST BIDDER: The Presidency from Dwight D. Eisenhower to George W. Bush

In a no-holds-barred style, Friedenberg () decries recent U.S. presidents as manipulators of "legislative capitalism": elected by those special-interest groups that give them the most money and, in turn, appointing to key administrative positions these same friends, often leaders of major industries, like defense contractors or scions of wealthy families, with many of the same names continually circulating in positions of high power. Devoting a chapter to each presidency, Friedenberg keeps a journalistic balance while making his opinions spotlessly clear. For example, while praising LBJ for enacting the 20th century's most progressive civil rights legislation, he also calls him "a discord of vulgar traits, a bawdy loud-mouth, liar, conniver, show-off, as sex obsessed as Jack Kennedy but with less style, and a peddler of federal benefits to others and even more to himself." And while Carter, to Friedenberg, "was no different than other recent presidents and would-be presidents in scratching to the top and paying off friends and patrons," he was also "one of the few twentieth century presidents who did not use the CIA and other government agencies to undermine foreign countries or involve us in foreign adventures." Unfortunately, his writing is uneven and sometimes digressively gossipy (e.g., on a particularly tacky component of Catherine Zeta-Jones's and Michael Douglas's wedding). Friedenberg postpones until near the end his best arguments against plutocracy and for democracy—involving campaign finance reform, one six-year presidential term, disbanding the electoral college and providing for all children a better education, which he sees as the key to continued economic strength. Illus.