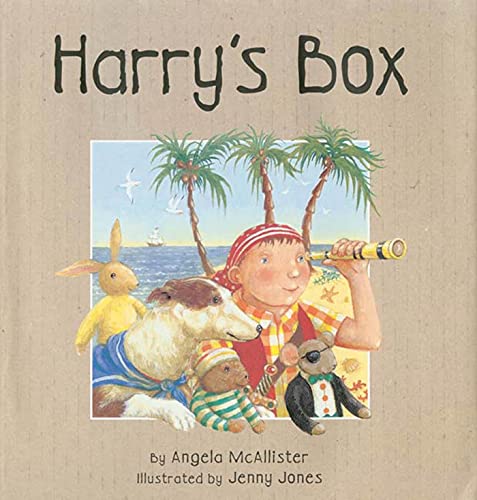 McAllister's () nimble prose and Jones's () warm illustrations lift a boy, a dog and a cardboard box out of the ordinary. In return for helping his mother at the supermarket, Harry gets to keep the box in which they toted home the groceries. "First he put it in the kitchen," the text starts, while an illustration shows Harry peering into the opening of his new treasure, his wolfhound at his side, surrounded by some stuffed toys and a striped blanket. On the next spread, "[The box] became a shop full of toys, treats and treasures"; Jones conveys the boy's vivid imagination, as the striped blanket transforms into a liner on a shop shelf, and a stuffed mouse holds a baguette. When "a difficult customer wanted bones and old slippers" (his pet is the only live occupant), the shopkeeper closes up, to explore a lion's den. Jones shows the realistic scenes as transitions from one fantasy to the next (he moves the box from kitchen to garden). Repetition in form and text invite readers to guess at the next scenarios (a pirate's ship, an underwater cave). Harry's dog always brings the fantasies to a close, until the end, when his mother approaches the "castle" sporting a cape and bearing a tray of goodies ("But when the foe arrived she brought the king's favorite cookies"). After the snack, sleep claims boy and dog; they dream of "all the boxes they could make tomorrow," echoing the ambitions of imaginative kids everywhere. Ages 4-8.