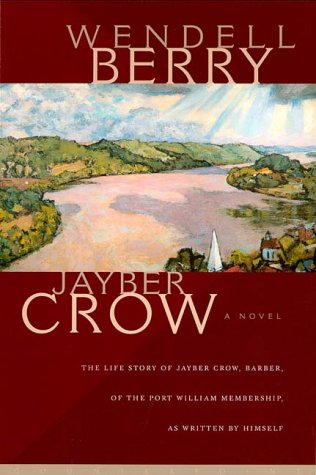 The role of community in the shaping of character is a recurring theme in the work of poet, essayist and novelist Berry, as evidenced once more in this gratifying novel set in Berry's fictional Port William, Ky. Jayber Crow, town barber from 1937 until 1969, is born in the environs of Port William, but after the deaths of his parents and, later, his guardians, he is sent to an out-of-town orphanage at the age of 10. Returning 13 years later, in the flood year of 1937, the solitary young man goes on to learn the comradely ways of the town. ""In modern times much of the doing of the mighty has been the undoing of Port William and its kind,"" Crow reflects--a reflection, too, of Berry's often-stated beliefs that salvation must be local, that rootlessness and a fixation on the postindustrial era's bright new toys will destroy us environmentally and economically. Crow earns his living with simple tools; he becomes a church sexton, though he is not unthinkingly pious; and his unrequited love for farmer's wife Mattie Chatham is pure and strong enough to bring him serene faith. In contrast, Mattie's husband, Troy, the novel's villain, disturbs the ""patterns and cycles of work"" on Mattie's family farm, trumpeting ""whatever I see, I want"" and using a tractor. The tractor stands for the introduction of new machinery and the unraveling of the fabric of family farming. It is not surprising when Troy cheats on his wife nor does it come as a shock when the Chatham's young daughter becomes a victim of dire chance. Berry's narrative style is deliberately traditional, and the novel's pace is measured and leisurely. Crow's life, which begins as WWI is about to erupt, is emblematic of a century of upheaval, and Berry's anecdotal and episodic tale sounds a challenge to contemporary notions of progress. It is to Berry's credit that a novel so freighted with ideas and ideology manages to project such warmth and luminosity. 12-city author tour. (Sept.)
close
Details