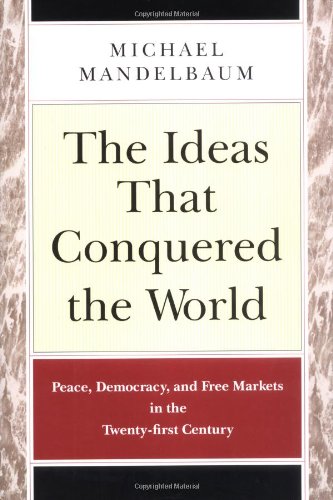 THE IDEAS THAT CONQUERED THE WORLD: Peace, Democracy, and Free Markets in the Twenty-First Century

Mandelbaum, foreign policy professor at Johns Hopkins and a columnist, brings extensive experience in policy analysis to this examination of the political and economic ideas he believes will dominate the post–Cold War era. He expounds upon and assesses what he calls the Liberal Theory of History. Liberalism, as the author defines it, harkens back to three ideas synthesized by Woodrow Wilson at the end of WWI. First is the primacy of free markets as the world's indispensable economic engine. Second is the recognition of democracy, with its constitutional limits on government power, as the most advantageous political system. Third is an instinct for peaceful relations among nations, marked by transparency in armaments and by common security arrangements; peace has replaced war as the normal state of international affairs. These ideas, Mandelbaum asserts, are "mutually reinforcing" and have triumphed within the past 60 years over the illiberal and brutal systems of fascism and communism, continually gaining adherents. To that extent, Mandelbaum concludes, there is a basis for hope for the 21st century. Still, as he acknowledges, there are dangerous countercurrents loose in the world, and numerous flash points, such as Taiwan (the most dangerous place on earth, according to the author) and the dragon's lair of the Middle East. Policy enthusiasts will read Mandelbaum's astute and exceptionally well-written analysis with great interest and may even share his cautious optimism about liberalism's prospects.