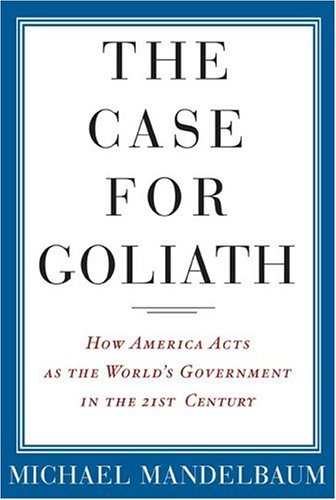 The Case for Goliath: How America Acts as the World's Government in the 21st Century

As this strained defense of American power acknowledges, America's international hegemony lacks the conventional hallmarks of government, like a monopoly of force, the power to tax and legislate, and the explicit consent of the governed. But it does, the author contends, furnish "public goods" to "free riders" in an ungrateful world that likes to gripe about American domination while tacitly welcoming it. U.S. troops abroad act as a "public health service" forestalling outbreaks of war and nuclear proliferation, and as a "pest control service" against rogue regimes. America safeguards the world's oil supply, like a public energy utility. The dollar is the world's reserve currency, and Washington organizes bailouts of bankrupt countries and promotes free trade, benefiting all. Even the huge U.S. trade deficits are a kind of global Keynesian stimulus policy, with the American shopper serving as the world's "consumer of last resort." Mandelbaum—an international relations professor, columnist and author of —deploys the world-government analogy less as an analytical principle than as an apologia. His anodyne language of government service portrays America's international initiatives as principled, systematic and benevolent, rather than ad hoc, erratic and driven by domestic interests. The result is a euphemistic picture of the underlying motives and controversial effects of American foreign relations.