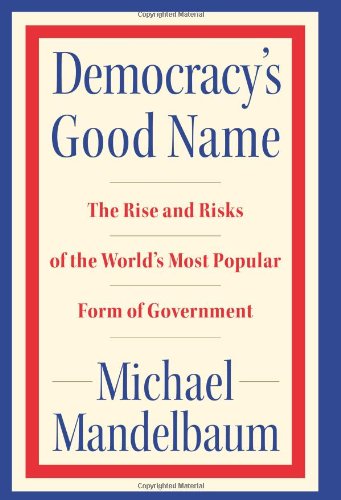 Democracy's Good Name: The Rise and Risks of the World's Most Popular Form of Government

Democracy, until recently, was an anomaly in a landscape of monarchies, dictatorships and empires; its critics—including America's founding fathers—associated it with mob rule and demagogic tyranny. In this engaging treatise, Mandelbaum ( ) explains how the modern democratic fusion of popular sovereignty—i.e., majority rule—with individual liberty came to dominate the world's polities. His first reason is straightforward: democracy works. Democratic nations, he notes, especially the flagship democracies of Britain and the U.S., are wealthier, stronger and more stable and inspire other countries to emulate them. His second, more provocative explanation, is that the modern spread of free markets provides a “school for democracy” by establishing private property (the fundamental liberty), respect for law, civil society, organized economic interests as the forerunners of political parties, and the habit of settling differences by negotiation and compromise rather than violence. Mandelbaum's market rhetoric—he calls democracy the “leading brand of political system” among “knowledgeable political consumers”—can be a bit simpleminded. But readers will find a lucid, accessible blend of history, political science and sociology, with a wealth of fresh insights into the making of the contemporary world.