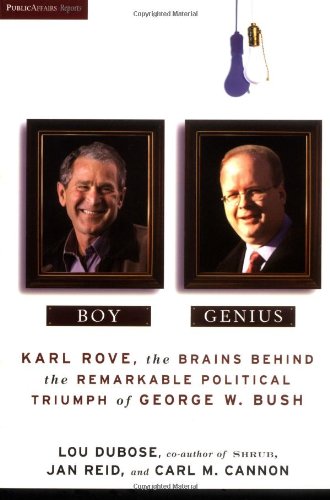 The career and canny rise to power of Karl Rove, the man President Bush calls ""boy genius"" and some Texans call ""Bush's brain,"" gets a thorough rundown in this entertaining political bio by longtime journalists Dubose, Reid and Cannon. In a breezy, critical style, the authors recount Rove's early fascination with politics, his first political ""job"" (as a teen rally organizer for Utah Senator Wallace F. Bennett's 1968 re-election campaign) and his first big political prank (stealing stationery from an opposing campaign and inviting outsiders to headquarters for ""free beer, free food, girls and a good time for nothing""). In 1980, Rove, who'd spent the previous decade in Washington, D.C., moved to Texas, in part to help with Bush pere's first run for president. He saw vast potential for Republicans in Texas, though it had long been Democratic Party stronghold; during the next 20 years, more than any other single person, Rove turned Texas into a ""Republican state."" He courted conservative Democrats and recruited attractive, little-known candidates; he built disciplined, well-funded campaign organizations; he reached out to wealthy, conservative constituencies; he used negative information, whether true or not, to derail opposing campaigns; he sometimes fielded several candidates to beat an opponent; and he campaigned not just to win but to destroy his challengers. He also nurtured George W. Bush into a formidable force. (He said, ""Political hacks like me wait a lifetime for a guy like this to come along."") Early on, Rove played to Bush's strengths, limiting most of his public appearances to small gatherings and reminding him to repeat the simple themes of his campaigns. As the book puts it about his race against Gov. Ann Richards, ""the marathoner Bush just kept coming, always on message."" Somewhat snide but definitely enlightening (on the cover ""Boy"" appears under Bush's picture while ""Genius"" appears under Rove's), this account offers a detailed look at one of the most powerful politicians in the U.S.
close
Details