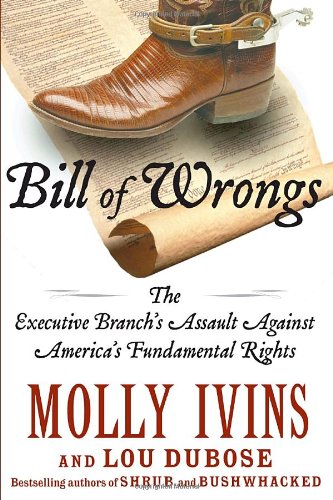 The threats to the Bill of Rights cited by the late populist gadfly Ivins and Texas journalist Dubose (coauthors of ) in this scattershot survey run the gamut from physical to political violations. Dire indeed were the infringements of rights endured by Murat Kurnaz, an innocent German Muslim of Turkish descent held as an enemy combatant by the U.S. military for five years and subjected to waterboarding and electroshock. The Dover, Pa., school board's effort to insinuate intelligent design into biology courses has been much covered, though perhaps less bluntly than here (the defense lawyers “just weren't as smart” as those for the plaintiffs). As for the Second Amendment, the authors castigate President Bush for being too protective of the right to bear arms. In between there are mentions of journalists jailed for shielding sources, librarians gagged by Kafkaesque government secrecy rules and a slew of citizens arrested for peaceably protesting in the vicinity of the president. (Many of these cases were quickly resolved once the ACLU got involved.) If, as Ivins and Dubose hint, there's a concerted assault on our freedoms, there 's still plenty of ineptitude: in one instance they cite, the feds accidentally sent top secret records of illegal electronic surveillance of suspected terrorists to the suspects' lawyers.