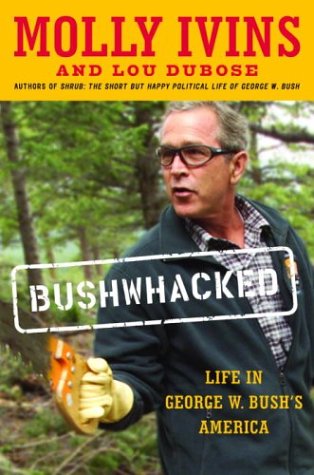 Ivins's mordant wit, political passion and uninhibited energy are unique among political writers and translate into entertaining reading for anti-Bushites. Together with co-author Dubose, Ivins () offers a ferocious attack on "Dubya," arguing that he has taken the country in a direction he conveniently failed to mention during the 2000 campaign. That direction, according to Ivins, endangers workers, the poor and disadvantaged, the middle class and, for good measure, the Bill of Rights. Her message is that Bush's education, economic, tax and environmental policies, his energy policy, his response to the Enron scandal all have one thing in common: "setting the fox to guard the chicken coop." The "fox" in this case is business interests; the chickens are the EPA, the SEC, the Federal Energy Regulation Commission and other agencies whose purpose is to protect citizens from capitalism's excesses. Simply put, Bush, according to Ivins, has abandoned the interests of American citizens for the interests of corporate America. Two things distinguish this from the rest of the burgeoning anti-Bush literature: Ivins's substantive arguments and her language and humor, which are refreshingly inventive. Members of the Texas Supreme Court, dominated by then–Governor Bush appointees, are "nine justices beloved for their canine fidelity to corporations." Bush's Middle East policy, which Ivins says is driven by the evangelical right's eschatology, "has produced alliances as peculiar as the Michael Jackson–Lisa Marie Presley union." Nonetheless, readers shouldn't be misled: Ivins and Dubose do not believe Bush is funny; they are outraged by what they identify as his excesses. They want readers to be outraged, too—and many will be.