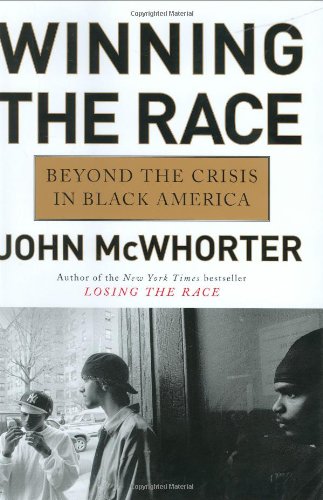 Winning the Race: Beyond the Crisis in Black America

In this sequel to his 2000 bestseller, , McWhorter exhorts blacks to leave their "anti-whitey theatrics" behind and acknowledge the new racial realities of America. What began as civil rights activism in the late 1960s, he argues, has devolved into empty gestures that leave blacks "defined by defiance" and unwilling to face their problems with innovative responses. The flight of industrial jobs and middle-class blacks from the inner city and the spread of drugs should all have been dealt with head-on, he writes, but instead a debilitating rejectionist attitude took hold. McWhorter vigorously claims that, while blacks weren't well off before the '60s, black Indianapolis in 1915 wasn't "New Jack Indy," and blacks managed to get by without welfare. Yet welfare ended urban blacks' self-reliance and "taught poor blacks to extend the new oppositional mood from hairstyles and rhetoric into a lifestyle separated from mainstream American culture." Blacks grew to think of studying hard as "acting white," and a destructive sense of "therapeutic alienation" that ignores personal responsibility permeated black society, from school and hip-hop culture to leadership and politics. Accessible, if at times long-winded and repetitive, McWhorter's provocative, tough-love message is both grounded in history and forward-looking.