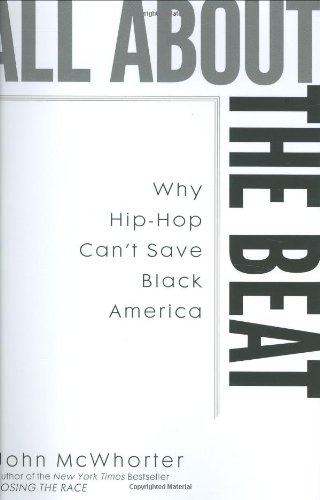 All About the Beat: Why Hip-Hop Can’t Save Black America

In this uneven critique of mainstream and socially “conscious” rap and hip-hop, McWhorter ( ) pillories the genre for positioning itself as a political—even revolutionary—medium. In the author’s analysis, hip-hop is typified by narcissism rather than altruism, a culture of complaint rather than creative solution and a willful blindness to the real problems affecting black communities; McWhorter demonstrates how frequently artists rail against police brutality and how few mention HIV/AIDS, the single biggest killer of African-Americans. The author’s admiration for the genre generally keeps his criticisms from sounding shrill, but it cannot compensate for the book’s flaws. While McWhorter lambastes rappers for failing to address “real” issues, he doesn’t either: like the hip-hop artists he chides, the author romanticizes activism while appearing clueless about the nuts and bolts of grassroots work. Equally troubling are McWhorter’s unsubstantiated theories, chief among them his claim that African-Americans are more inclined to judge a statement by how it sounds than what it communicates. More interested in skewering hip-hop than suggesting paths to substantive social change, this book ultimately frustrates more than it illuminates.