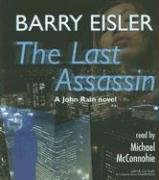 Japanese-American assassin John Rain is growing tired of the killing game and wants to find a way out. When he tries to reconnect with Midori, the mother of the child he's just learned he had, he runs afoul of the Yakuza, who hope to use Rain's son as leverage against him. McConnohie narrates in a resonant, deep baritone using a plain American dialect, but when voicing foreign characters, he skillfully adds just enough of an accent to differentiate them. Throughout the book, Eisler keeps the action coming at a fast and furious pace, and McConnohie is up to the task; he brings the fighting sequences vividly to life with his measured and deliberate pacing, keeping the listener fully engaged and riveted. The novel works best when Eisler sticks with Rain's point of view, less so when he shifts to other characters. McConnohie, who does a fine job in every aspect of this recording, is also at his best when bringing Rain to life.