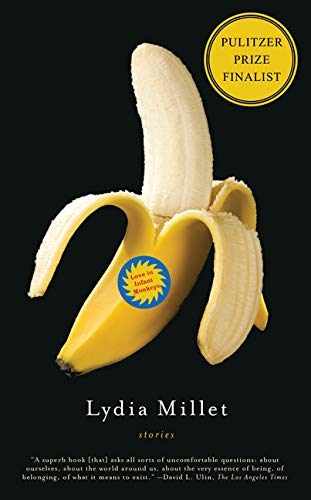 It makes a bizarre kind of sense to pair animals with celebrities, as the PEN-USA Award–winning Millet does in her new collection, since both tend to provoke our sympathy while remaining fundamentally alien. This disconnect proves a fascinating subject for stories where David Hasselhoff's dachshund (which is “not his fault”) inspires meditations on mortality, Noam Chomsky holds forth on hamsters, Jimmy Carter spares the swamp rabbit, and Thomas Edison is haunted by the elephant he electrocuted. Millet's apprehension of interspecies rapport is particularly sharp in “Sexing the Pheasant,” where Madonna's remorse at shooting a pheasant (while hunting in Prada boots, naturally) is mainly symptomatic of her own self-regard. For sheer line-for-line delight, nothing beats “The Lady and the Dragon,” where a Sharon Stone look-alike is lured to the bedside of an Indonesian billionaire who plans to make the movie star his concubine. Millet's stories evoke the spectrum of human feeling and also its limits, not unlike the famous naturalist in “Girl and Giraffe,” who watches as lions and giraffes live out the “possibilities of the world” while hiding in the underbrush: “being a primate, he was separate forever.”