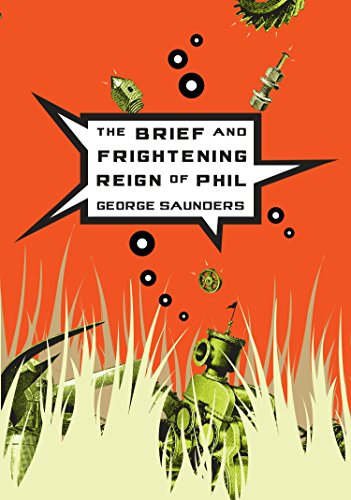 The Brief and Frightening Reign of Phil

The shift of target to Iraq War–era America proves problematic for major 1990s satirist Saunders ( ), who here checks in with an allegorical novella centered on the tiny imaginary nations of Inner and Outer Horner. The citizens of Inner Horner, live-and-let-livers who have a lot of unproductive discussions, are countable on two hands, and they are not-quite-human: one man's torso is simply a tuna fish can and a belt. (There are 15 b&w illustrations scattered throughout.) When their nation suddenly shrinks, the group spills into Outer Horner, and a border dispute results. It paves the way for the rise of an everyman Outer Horner dictator named Phil—a jingoistic, brute-force bully. The eventual fortuitous military intervention by Greater Keller, a neighboring technocapitalist nation of latte drinkers, comes after much lingering over the mechanics of Phil's coup. (There are multiple references to the "spasming rack" from which Phil's brain periodically slides.) Despite press-chat comparisons to , the book lacks Orwell's willingness to follow his nightmare vision all the way out to the end. Saunders delivers some very funny exchanges and imaginative set-pieces, but literally has to call in a deus ex machina to effect Outer Horner's final undoing. It's entertaining, but politics and war don't really work that way, allegorically or otherwise.