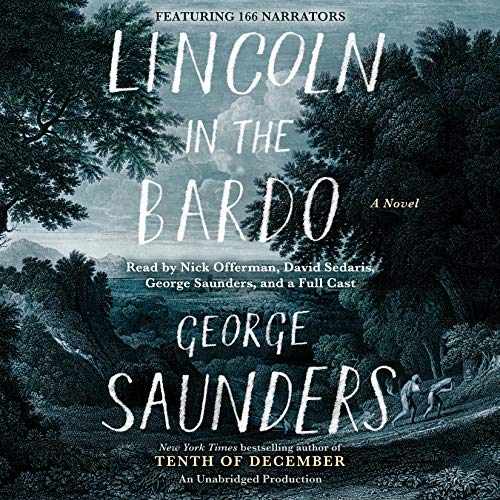 It takes a full six minutes at the end of this unforgettable audio production to read the cast list of 166 actors: comedian Nick Offerman, author David Sedaris, Hollywood A-listers Carrie Brownstein, Don Cheadle, Lena Dunham, Bill Hader, Miranda July, Julianne Moore, Ben Stiller, Susan Sarandon, and Jeffrey Tambor, and others. The main challenge of Saunders’s Civil War–era novel is fragmentation. In addition to the plethora of characters to keep straight, the novel features several challenging elements of postmodern fiction: punctuationless sentences, a constantly shifting perspective, and a mélange of factual snippets and boldly fabricated sources. The effect, however, is a wonder brought to life in these performances. Sedaris steals the show as Mr. Bevins, a wry and lonely spirit who tarries in the titular bardo, mourning the lover who left him. Two other performances deserve special mention: Kirby Heyborne, a veteran audiobook narrator, more than holds his own in this star-studded cast, breaking listeners’ hearts with his quiet and sensitive portrayal of Mr. Lincoln’s recently deceased boy Willie. And one of the book’s best performances belongs to Saunders himself, who plays the Reverend Thomas, a timid man of the cloth who is haunted by sin—but what sin, however, he doesn’t know. If fiction lovers listen to just one audiobook in 2017—or ever—it should be this one. A Random House hardcover. (Feb.)
close
Details